View of Owhyhee, one of the Sandwich Islands, also known as ‘The Death of Cook’ (John Cleveley the Younger ,1747–1786). James Cook was one of the greatest 18th century explorers.

The transition from the Age of Pisces to the Age of Aquarius started about 500 years ago. One of the precursors of the upcoming globalization during that time was the voyages of exploration in the coming few centuries. During this period Europeans explored Africa, the Americas, Asia and Oceania. This led to the rise of colonial empires and a to a remarkable exchange of plants, animals, foods, human populations, diseases and culture between the old and the new worlds. These European explorers made it possible to globally map the world, resulting in a new world-view and distant civilizations acknowledging each other. 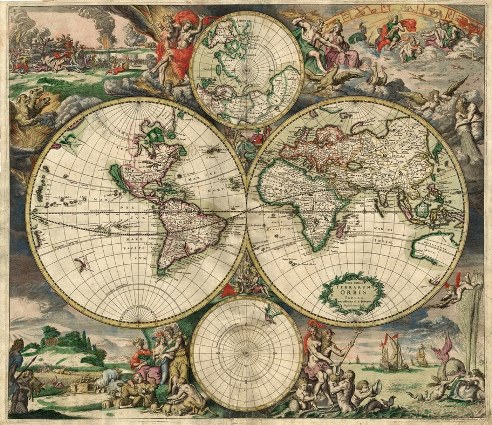 What allowed this exploration on the one hand and what benefited from it on the other hand was the technological platform that got upgraded again and again over the last few centuries. For example, naval transportation created the need for better means of navigation, surveying and cartography, which in turn further improved the exploration capabilities. Still, by the beginning of the 20th century, there were some uncharted areas on our planet, white regions on the map. Some places in Antarctica, some of the highest mountains, and some of the deepest oceans never saw a human being. In the last century air transportation had the same effect on exploration that naval transportation had in the previous centuries. And space flight had the same effect in the last few decades. As means of transportation evolved, so did the means of communication – the mobility of information had to be improved along side.

The last century saw great advancements on that front – radio communication, cellular communication, the internet, image transmission, video transmission, and live communication. Within the last few decades, the entire Earth got mapped and started being continuously monitored at different wavelengths. Mankind has started mapping other planets within our solar system. The increasing probing of our own planet and of other planets in conjunction with ever improving communication capabilities kept and keeps transforming our world view. Ultimately, it led to a more holistic view of the planetary system. Mankind has realized the impact of our very species on planet Earth and that led to the emergence of the environmental movement. 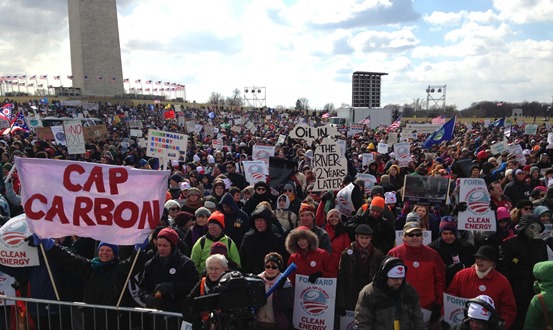 A protest near the Washington Monument in early 2013 to protest the Keystone XL pipeline and support action on climate change (photo by Jmcdaid).

This new view of the Earth as a living organism, combined with the technological platform that enabled that point of view in the first place is now allowing people and organizations to turn against the very same entities that drove the accelerated globalization of the last few decades – the profit driven states, industries, and corporations. The expansion of certain industries into global scale many times came at the expense of the environment. But the availability of information through the internet and through social networks like Facebook, allows people to get organized, to scrutinize and to criticize some of the practices in these industries. One recent example is the environmental protests opposing the Keystone XL pipeline. This pipeline is supposed to allow the transport of 800,000 barrels a day of heavy crude from oil sands formations in Canada to Texas refineries, and will involve an oil extraction process that emits more greenhouse gases than other forms of production. This project moved into the political arena, as the environmental movement who backed up the election of President Obama is now using its political ties to urge his administration to reject the project.

Like with other issues that are in the public eye these days, the new thing is not whether these kind of decisions are right or wrong, good or bad. The new thing is that these subjects are even on the table. What allows this to occur is the new tone that is set by the influence of the Age of Aquarius. It brings not just the technological means that allow these events to unfold, but also, and mainly, the intellectual openness, the flexibility of mind, the inventive thinking, the humanitarian approach, and, the rebellious nature of this sign and age.