Ram headed sphinxes at the entrance to the Karnak Temple in Luxor, Egypt (photo by Dennis Jarvis, Halifax, Canada)

The Age of Aries, or the Ram, spans approximately the period between 2200 and 100 BC. It is the age defined by the Sun being in the constellation of Aries on the spring equinox. Additional influences during this age are of Cancer in the summer solstice, Libra in the autumnal equinox, and Capricorn in the winter solstice. The Libra (the Scales) influence is an especially important secondary influence, since during this period the first codes of justice in known history were recorded. The more pure Aries influence, outside the influence of the cusps of the earlier Taurus and the later Pisces, was experienced between about 1700 and 600 BC. In this narrower period we see the regeneration of the Egyptian civilization as the New Kingdom, bringing Egypt to one of its most prosperous period; At the same time the Hebrew people break away from their Egyptian benefactors turned enslavers and establish a line of prophets that lasts for centuries; Babylonia reaches its peak as a major regional power and its most well known ruler, Hammurabi, presents one of the first codes of law; During this time the ancient sacred hymns of the Vedas were compiled and the Vedic religion thrived in India.

A Hittite goddess (8th century BC)

The Element associated with Aries is Fire, and as such, Aries has an energetic, courageous, versatile and passionate tone. Aries is the first sign of the Zodiac, and people born under Aries are the leaders of the pack, although they prefer to initiate rather than to complete. They tend to be enthusiastic, extroverted, rebellious, passionate, brave and valiant. This combination may make them appear as arrogant. Arians can also be stubborn, impulsive, undisciplined, and confrontational. These traits may explain why, during this age, we have vast expansions of empires, sometimes at the expense of one another. The classical examples are Hammurabi’s Babylonia dominating Mesopotamia and its rival to the North, Assyria; Ancient Egypt during the New Kingdom era; and the Hittite empire, centered in Asia Minor, all extending periodically on the expense of each other; The colonization of the Greek islands by the Mycenaean Civilization, and the later expansion during the Archaic Greek period along the Mediterranean and Black Sea coasts; And towards the end of the Age of Aries, the Persian Achaemenid Empire; and of course the Roman Republic.

Aries is associated with the metal iron and the second half of the Arian Age overlaps with the Iron Age. Iron was for the first time smelted and smitten into swords in the early phase of this era, replacing the heavier, softer, and duller bronze swords of the Taurian Age. It was heating by fire, the element of Aries, that allowed the smelting and the smiting of iron, quite a different processing than the casting of bronze. A well known weapon that was developed by the Assyrians during this time is the Battering Ram, designed to break open the walls of fortresses or their wooden gates. The iron plow allowed the transition from mobile settlements to stationary agriculture.

However, one most significant heritage of this age to humanity is more abstract – the proclamation of codes of laws by quite a few civilization of that age. The 18th century BC Babylonian king, Hammurabi, is known for the set of laws called Hammurabi’s Code, one of the first written codes of law in recorded history. Sometime in the 14th century BC, regardless of how it really happened, the Ten Commandments were formulated by Moses, the Hebrew Lawgiver. These were first transmitted orally and developed into the elaborate set of instructions and laws for every aspect of life known as the Torah.

Probably within the same century, king Akhenaton of the eighteenth dynasty of the New Kingdom in Egypt abandoned the traditional Egyptian polytheism and introduced monotheism. This attempt failed, and after his death the traditional practices were restored. Other monumental scriptures from this age are the Book of Going Forth by Day, a New Kingdom funerary text describing the events occurring after death; Ashurbanipal’s collection of cuneiform documents for his royal palace at Nineveh, the capital of the late Assyrian empire; The four Sanskrit Vedas, which laid the ground for the Hindu way of life; And the Avesta – the primary collection of sacred texts of Zoroastrianism – and within it the Gathas hymns, believed to have been written by Zoroaster himself.

One of the best examples of an Aries civilization is that of the Hebrew people, starting from the prophet Moses, leading the Israelites in the Exodus out of Egypt (representing the old Age of Taurus), through their peak as a one unified kingdom to the destruction of the Temple of Solomon at the beginning of the 6th century BC. Inasmuch as the Hebrew spiritual tradition was influenced by Ancient Egypt, the rigidity of the Egyptian civilization necessitated the breaking away from it. The very Aries-like confrontation of Moses with the Pharaoh started this process. It is interesting that in some works of art Moses is depicted as having horns. On their way to the promised land, the Israelites waited for the right moment to return to their worship of the Golden Calf, representing the old familiar influence of Taurus that they knew in Egypt. But Moses, again, in a very Aries-typical reaction, is enraged at seeing that and punishes the people by keeping them in the desert until the entire Golden Calf generation passes away.

Moses and all the other prophets to follow demonstrate the new relationship of religion and spiritual tradition to the ruling aspect of society. The obsession of the Taurian Age with power necessitated the breaking apart of the three great pillars of humanity – civilizational order, religion, and spiritual tradition . The connection of the human level to a higher level could not be reconciled with the materialism and corruption associated with positions of power, so they had to be broken away from. That is why from this age on, the prophets, God’s messengers on the Earth, and the priests or the religious leaders, are many times in opposition to the ruler. It happened with Moses and Pharaoh; with Akhenaton and the priesthood who opposed his motion to abandon the existing religious order; with Elijah and king Ahab who persecuted him and his companions; and with many others.

The prophet and his companions were the ones who understood the demands put on the people by God, and the king was part of the people. He was no longer the head of the religious order and of the initiates, but rather an ordinary person with a certain political role. The prophet received part of his acknowledgement through the confrontation and opposition to the ruler. The high priest and the prophet were usually not one person, but what they represented – the religious order and the spiritual tradition – worked in tandem with each other, but not with the ruler and the social order. In some sense, Egypt’s Akhenaten tried to restore the old order of the Taurian Age and center the three roles in himself – the ruler, the high priest, and the prophet. Even though the overall structure of civilization did not collapse altogether after his attempted revolution, the relationship between the Pharaoh and the high priest, were never the same again.

A detail of The Sacrifice of Isaac (Fresco by Franz Xaver Kirchebner). Note the ram in the lower right.

After restoring the religious practices back to where they were prior to Akhenaton, Egypt went back to worship Amun-Ra, the chief God throughout the New Kingdom. It is interesting to note that many times Amun-Ra is depicted as a having a ram head. The Jewish tradition also incorporated the symbol of the ram or lamb. The Old Testament story of Abraham’s binding of his son Isaac describes Abraham’s act of faith, and the replacement that he finds after being stopped by the angel is a ram caught in the bush. According to some, Abraham was active in the 18th century BC, right on the verge of the “classical” Aries influence. This story is also a symbol of the rejection of human sacrifice that was more prevalent in the Taurian Age, and the transition to animal sacrifice. The internal meaning in both cases is the same – the sacrifice of one’s lower manifestations and their transcendence. But the external form changed during that period. Centuries later, the people of Israel integrated the practice of sacrificing animals on an altar with four horns situated in the temple in Jerusalem.

The highest manifestations of Aries are related to leading in a courageous way, even against great odds, like Moses leading his people out of Egypt and through the desert to the Holy Land or the definition of laws for life by Hammurabi. The lowest manifestations of the Arian Age were related to stubbornness and the reluctance to leave the old, as well as being over-ritualistic and fixated on the law and on the external aspects of the law.

The Tribute Money by Rubens

The Taurian people became similarly fixated on materialism. At the end of the Age of Aries, the heralds of the new Age of Pisces, Buddha and Christ, challenged the old Hindu and Jewish religions and criticized their representatives for their hypocrisy and the differences between their inner and outer moral states.

Some of the great empires in human history were the vehicles of the transition between the Arian and the Piscean ages in the centuries prior to the turn of the first millennium AD. The Greco-Roman civilization started as a classical Aries, expanding rapidly throughout the Mediterranean and Asia with its unique philosophy and art and almost secular civilization order. 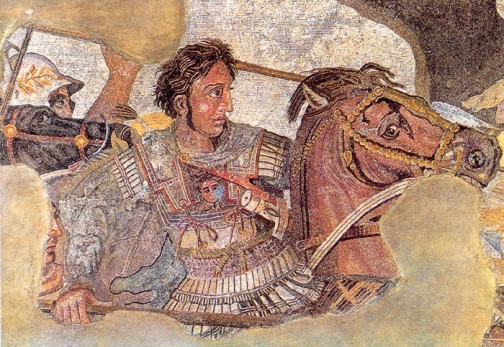 However, the end of the Roman Empire was well into the Age of Pisces, and it was the main means by which Christianity became global in the new Age of Faith. In the Far East, the Warring States period ended in the 3rd century BC with the unification of China. Confucianism, emphasizing personal and governmental morality, correctness of social relationships, justice and sincerity, prepared the grounds for the arrival of Buddhism from India to China, and from there to the rest of Asia. The Persian empire ruled over Western Asia and parts of Africa and Southern Europe, and later became the fertile ground for the expansion of the Hellenistic civilization, preparing the grounds for the ascent of the most classical Pisces civilizations – the Islamic Empire.