Pharaoh Menkaura, accompanied by the goddess Bat on his right and the representation of the town Hu (in which Bat was worshipped) on his left.

As the Zodiac Ages go by, there is a certain trend when it comes to religion and spirituality. During the Age of Taurus, The three great pillars of human life on the Earth – civilizational order, religion, and spiritual tradition were all alive. They were aligned with each other, and they were feeding each other. They were all unified by the role of the ruler of the kingdom, which was also the representative of a higher world on the Earth. The hierarchy was clear. Everybody knew their place in relation to each other. This situation is represented by the three Egyptian figures on the left. However, at some point, The obsession of the Taurian Age with power necessitated the breaking apart of these three great pillars.

The connection of the human level to a higher level could not be reconciled with the materialism and corruption associated with positions of power, so they had to be broken away from. That is why during the Age of Aries, the prophets, God’s messengers on the Earth, and the priests or the religious leaders, are many times in opposition to the ruler. It happened with Moses and Pharaoh; with Akhenaton and the priesthood who opposed his motion to abandon the existing religious order; with Elijah and king Ahab who persecuted him and his companions; and with many others. The prophet and his companions were the ones who understood the demands put on the people by God, and the king was part of the people. He was no longer the head of the religious order and of the initiates, but rather an ordinary person with a certain political role. The prophet received part of his acknowledgement through the confrontation and opposition to the ruler. The high priest and the prophet were usually not one person, but what they represented – the religious order and the spiritual tradition – worked in tandem with each other, but not with the ruler and the social order. 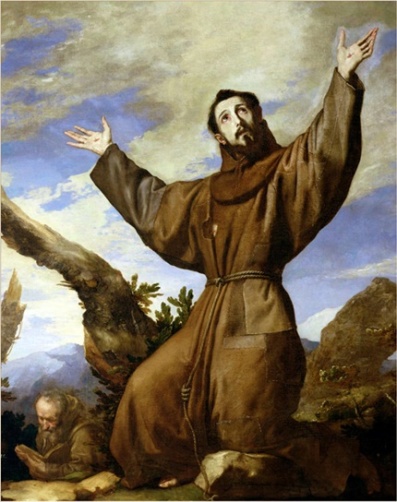 St. Francis of Assisi, the founder of the Franciscan monastic order (Jose de Ribera, circa 1182-1220)

During the Age of Pisces, we see yet another deterioration of the once harmonious connection between the state, religion, and spirituality – the breaking away of the spiritual traditions from religions. Even though new religions have sprouted out of the teachings of Buddha, Jesus, and Muhammad during this age, the spiritual traditions, which focused mainly on the inner work and not on external rituals, could not accept the rigid and extremist aspects of these religions, their attempts to rewrite history, and their accumulation of wealth and power of their own. The Christian papacy is one example of politicizing, corruption and rigidity of religion. That is why Christian Monasticism flourished in both its Eastern Orthodox and Western branches after the fall of the Roman Empire. These monasteries were like a current underlying the Church which went deeper in applying spiritual practices, such as special prayers or the use of physical work. The monasteries were not the leaders of the Church and they were quite distinguished from the general population of the followers of the Church. Another classical example for such a separate, more spiritual, current running parallel to a religion is the Sufi Orders within Islam. A similar spiritual discipline started during the Age of Pisces within Judaism – the Kabbalah, which ran parallel to the mainstream Jewish movements. It was hidden from the public eye for the most part, and was sometimes controversial in its views, because it teaches the individual how to connect to the Light of the Creator without the need of a rabbi, priest, minister or any other guru seeking to act on our behalf as an intermediary.

And what is next? The transition to the Age of Aquarius poses a very strong challenge when it comes to spirituality. Two trends have emerged in the last century or so:

The missing link seems to be a conscious teacher and a group of followers that always appear to bridge these periods of transition. It happened with Moses and the Israelites during the Age of Aries, and with Buddha, Christ, and Muhammad and their followers during the Age of Pisces. During these past ages, the spiritual traditions or schools were much more visible because there were part of the fabric of life. Moses was the spiritual leader as well as the religious leader of the Hebrews. Buddha, Jesus, and Muhammad were known figures in their time. But these days, as religions dissolve and spirituality is “flattened out” by the availability of everything, both real and false, on the Internet, any real school will be well hidden from the public eye. Is there a spiritual teacher somewhere that will be the seed from which the promise of the next age will spring forth?