The Age of Aquarius is the age of globalization, communication, and invention. The advances in technology through inventions and the possibilities of global communication 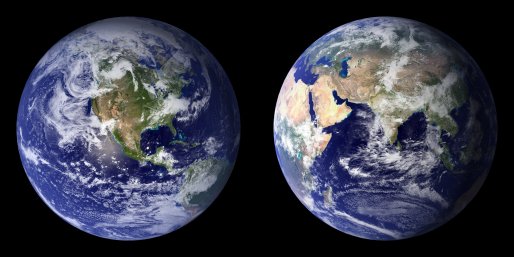 are already allowing sharing of ideas that penetrate national borders. This will only accelerate as time goes by through the Pisces-Aquarius cusp and into the more pure Aquarian influence. Simultaneously, the same technology brings in more information about how similar people are and how connected we all are in our planetary ecosystem. 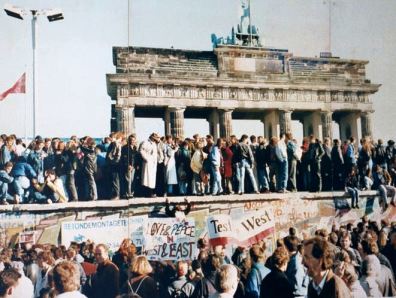 The Fall of the Berlin Wall, 1989, the Brandenburg Gate, Berlin.

We do not know what form civilization will take during the more pure Aquarian era, 2600-3500 AD, but somehow, between now and then, certain forms will need to be abandoned and in some cases torn apart or broken down. A perfect example of that was
the Fall of the Berlin Wall in 1989, as a result of the Peaceful Revolution, where global communication from the West played a key role.

As the influence of the Age of Aquarius intensifies, events like that show up more 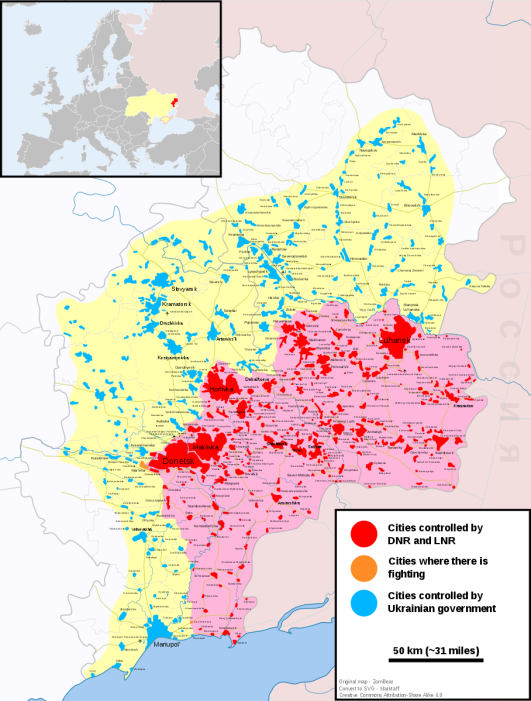 Map of the war in Eastern Ukraine. It shows areas controlled by self-declared local “republics of the people” (August 2014 by ZomBear, Marktaff)

frequently and more extremely around the world. Borders will disappear, as in the case of Syria and Ukraine, where foreign armies act freely with no interference to serve their interests. Whole countries will collapse into chaos as in the cases
of Syria and Libya, where it is hard to say who is the sovereign power. Even Western democracies these days are stifled in stalemates around decisions that are critical to their fate and sovereignty, like the UK and its years-long Brexit mess. 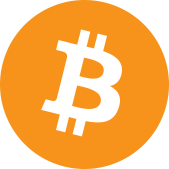 One of Bitcoin Logos, courtesy of Wikimedia Commons

WhatsApp, Instagram, and others extend to billions around the world. They allow communications between people across borders, even in war-stricken zones, where the national sovereignty collapses, providing exactly the services these countries ceased to be able to provide and replacing them in effect. Electronic currencies, or cryptocurrencies as they are called, like Bitcoin or the upcoming Libra by Facebook are aimed at streamlining international transactions and circumventing national bureaucracies. Other corporations are planning and starting to implement global internet through deploying smart satellite systems (Starlink by SpaceX, Amazon’s Project Kuiper) or balloons (Google’s Project Loon). Again, these projects are bypassing national jurisdiction, which has the potential of deteriorating national power even more, by allowing people to communicate and get information despite their country’s attempts to censor the internet. 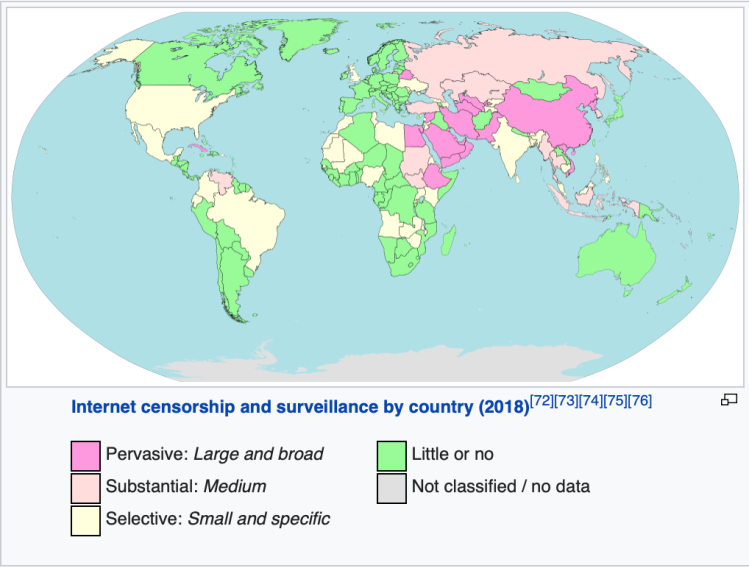 Another global phenomenon that plays a crucial role in nulling national powers in today’s world is climate change. Nature knows no nationality: rising sea levels, melting glaciers, mass extinctions of numerous species, spread of climate-related diseases, pollution, and most notably, human migration as a result of all of the above, are all pushing through borders. Some of these, like pollution or diseases, do that with almost no way to control or contain them. Others, like human migration can be better handled through customs controls and asylum requests, but even these are now harder to control when borders are being amassed by millions annually. The example of Syria touches each one of the subjects mentioned in this post: a climate crisis results in a civil war and a failed state that leads to an oppressive crackdown and censorship in an attempt to restore the statehood, followed by a massive migration into Europe. 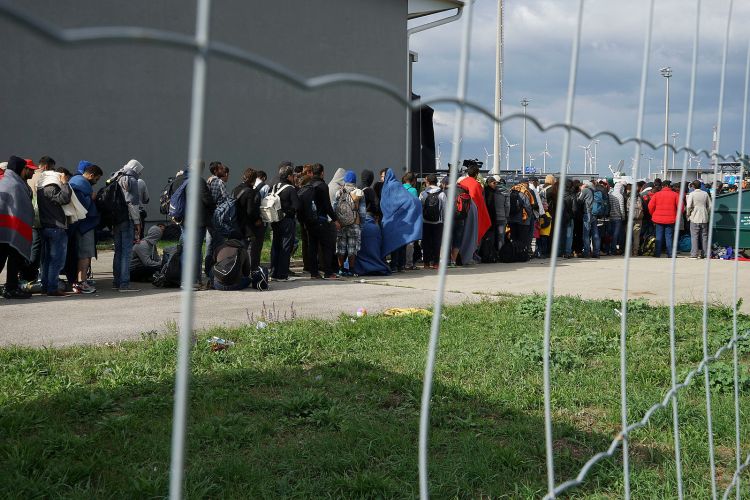 A line of Syrian refugees crossing the border of Hungary and Austria on their way to Germany. Hungary, Central Europe, 6 September 2015 (photo courtesy of Mstyslav Chernov under the Creative Commons Attribution-Share Alike 4.0 International license).

To conclude, many influences already make the national landscape today very different compared to even just twenty years ago. There is no escape from concluding that at the pick of the Age of Aquarius things will look very different. Naturally, nations will not give up their sovereignty easily and will fight to protect it and counter any attempt to take it away. Until then, we can keep observing how nations keep failing and collapsing and how new global entities overtake them. 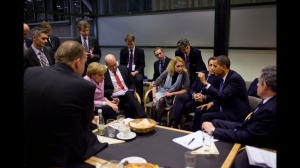 The Age of Aquarius is the age of world coalitions. Our world has become a global village, which creates problems and instabilities greater than what one nation can cope with. From climate change and pandemic outbreaks to terrorist networks – our modern connectivity makes us more vulnerable to these threats. More than the actual immediate damage, the psychological effect on the entire world through the media and social networks is even larger. That is why the solution to these issues must be on a global scale and cannot be worked out by a single country. 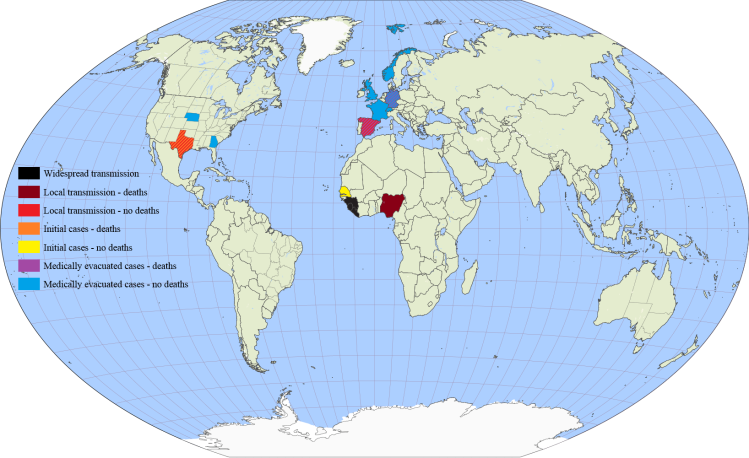 The locations affected by the 2014 Ebola Outbreak as of mid-October (image by AmericanXplorer13).

Never before has the world been so connected. Air transportation is so prevalent and far-reaching, that a virus could be carried to the other side of the world within hours. The news about an outbreak travel even faster, and fear is carried with them to even larger populations. The 2014 Ebola outbreak started in Western Africa but leaped quickly to Europe and the US through health workers. At the time of the writing of these words, the epidemic has not spread to the general populations in Europe and the US. The world has been slow to react, but by now a group of nations is mobilizing people and funds to help fight the epidemic. Among these are the US, China, India, the UK, France, Germany, Russia, Canada, Israel, Cuba, Turkey, and Brazil. Many of these countries are making these efforts in order to prevent the virus from getting into their own borders. Both the risk and its mitigation are stemmed from the same global environment that is coming with the Age of Aquarius. 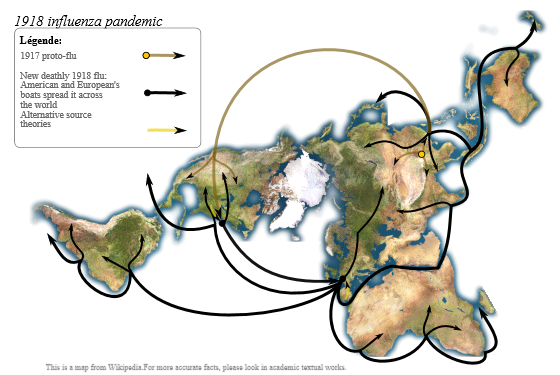 One of the famous pandemics of our times is the AIDS/HIV which infected and killed tens of millions. However, there are tens of millions that still live with the HIV virus. It is an outbreak of another virus that occurred at the dawn of the 20th century that shows how globalization is a leading factor in the creation and spread of pandemics. The so-called Spanish Flu pandemic of 1918 hit every continent on the planet, killing tens of millions of people. It is an example of an uncontrolled virus spreading due to a global driver, namely the mobilization of people and armies across the world during the last stages of World War I. Other factors of the civilization awakening to a global reality contributed to the spread of the deadly disease, including urbanization and better transportation combined with the still low level of aseptic techniques. For example, the most ill soldiers in the tranches of the war were sent back in crowded trains to crowded hospitals, which led to a second, much deadlier, wave of the pandemic. Interestingly enough, World War I is an example of one of the first world coalitions that was created to deal with other issues. But the very creation of this coalition brought about the unexpected global spread of the deadly virus. Globalization has its disadvantages… 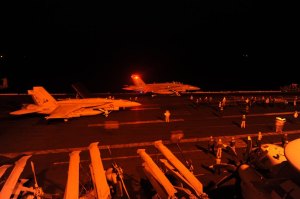 Here is another example of an unintended consequence of an international intervention – the Islamic State, the radical group that is gaining grounds both in the physical landscapes of Syria and Iraq, but also in the hearts of other Muslims around the world. Following the 2003 invasion to Iraq and the deposition of Saddam Hussein, this vicious strain of Al-Qaeda in Iraq participated in insurgency against the invading coalition forces and evolved over the last decade to what it is today: an extremely fundamentalist group using all sorts of horrifically violent methods to either convert people to join them or destroy these people in the most unspeakable ways. Using social media, this group succeeds in recruiting Muslims that have Western citizenship to travel to Iraq and Syria and join their cause. It also succeeds in spreading a tremendous fear in growing circles of populations around them, starting with the Iraqi army, the neighboring countries, and across the world. Again, it was a world coalition of 40 countries (with four that had a leading role in the fighting on the ground), that came together in order to resolve one painful problem – Saddam Hussein – but creating a new problem, perhaps more complicated than the original one. Instability was created as part of the process of globalization, both political globalization – a great number of nations trying to discipline a rogue ruler, and economic globalization – the Western World trying to secure part of its oil resources. A new coalition is now at work to fight against the Islamic State.

At its height, in a few centuries, the Age of Aquarius world may be a unified healthy and peaceful world. But the way towards that end is still long, full of opposition, setbacks, resistance, and hostility from the old age powers of religion and nationalism. The way is still long and harrowing, but the wheels of the heavenly influence cannot be turned back.